Hannah Dayton, Jonathan DiRusso, Kristopher Kolbert, Olivia Williamson, Aiste Balciunaite, Edridge D’Souza, Kelly Becker, Elizaveta Hosage, Muneera Issa, Victoria Liu, Raghuvir Viswanatha, Shu Kondo, Michele Markstein Adult stem cells can survive a wide variety of insults from ionizing radiation to toxic chemicals. To date, the multidrug resistant features of stem cells have been characterized only in vertebrates, where there is a critical need to understand how cancer stem cells thwart chemotherapy drugs. These studies reveal that the ability of both normal and cancer stem cells to survive toxins hinges on their high levels of expression of ABC transporters, transmembrane pumps that efflux lipophilic compounds out of cells. This has been observed across a wide spectrum of vertebrate stem cells including breast, blood, intestine, liver, and skin, suggesting that high efflux ability and multidrug resistance may be general features of stem cells that distinguish them from their differentiated daughter cells. Here we show that these previously described vertebrate stem cell features are conserved in Drosophila intestinal stem cells. Using a novel in vivo efflux assay and multiple drug challenges, we show that stem cells in the fly intestine depend on two ABC transporters–one constitutively expressed and the other induced–for efflux and multidrug resistance. These results suggest that stem cell multidrug resistance by ABC transporters is a general stem cell feature conserved over 500 million years of evolution.
Download Paper: PDF 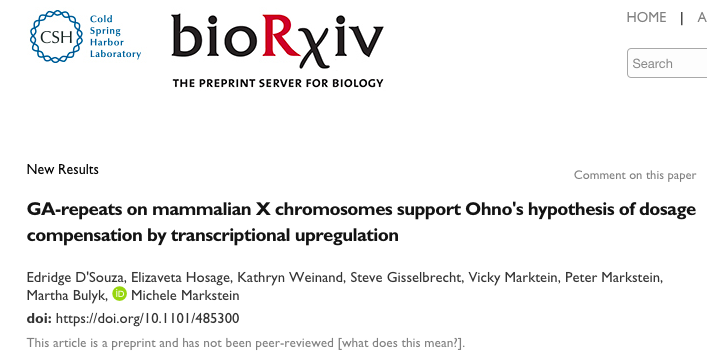 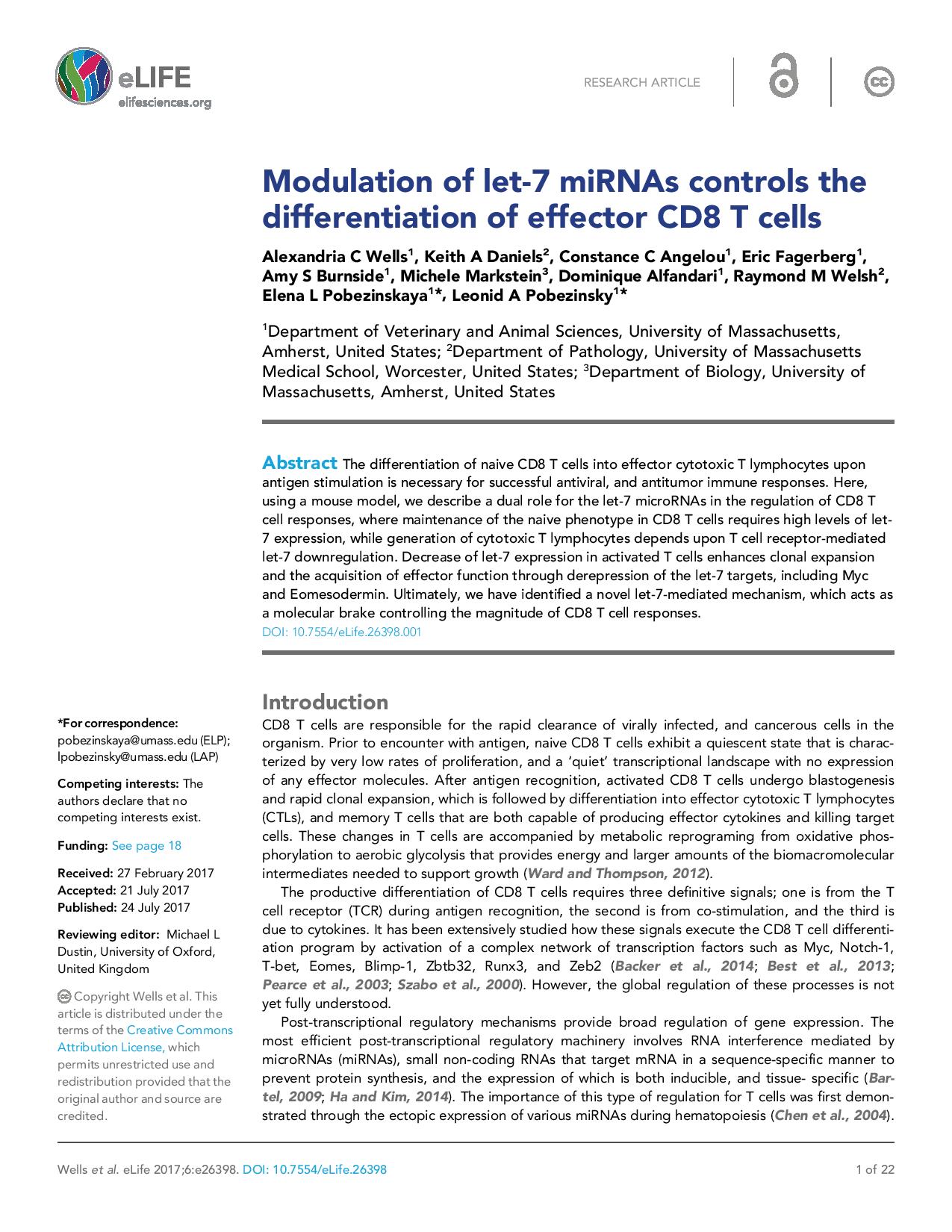 Babbitt C., Markstein M., Gray J.
In this special edition of Genomics,we present reviews of the current state of the field in identifying and functionally understanding transcriptional enhancers in cells and developing tissues. Typically several enhancers coordinate the expression of an individual target gene, each controlling that gene’s expression in specific cell types at specific times. Until recently, identifying each gene’s enhancers had been challenging because enhancers do not occupy prescribed locations relative to their target genes. Recently there have been powerful advances in DNA sequencing and other technologies that make it possible to identify the majority of enhancers in virtually any cell type of interest. The reviews in this edition of Genomics highlight some of these new and powerful approaches.  Download Paper: PDF 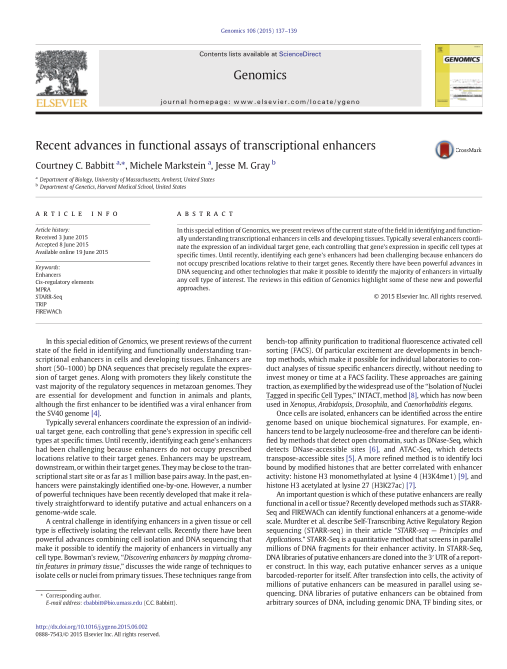 Amcheslavsky A., Nie Y., Li Q., He F., Tsuda L., Markstein M., Ip YT.
Intestinal stem cells (ISCs) in the adult Drosophila midgut can respond to tissue damage and support repair. We used genetic manipulation to increase the number of ISC-like cells in the adult midgut and performed gene expression profiling to identify potential ISC regulators. A detailed analysis of one of these potential regulators, the zinc-finger protein Charlatan, was carried out… Download Paper: PDF 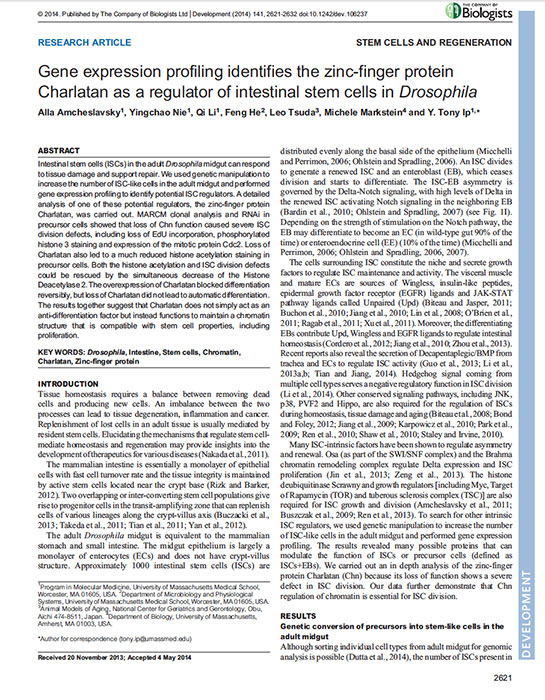 Here we report the development of an in vivo system to study the interaction of stem cells with drugs using a tumor model in the adult Drosophila intestine. Strikingly, we find that some Food and Drug Administration-approved chemotherapeutics that can inhibit the growth of Drosophila tumor stem cells can paradoxically promote the hyperproliferation of their wild-type counterparts. These results reveal an unanticipated side… Download Paper: PDF 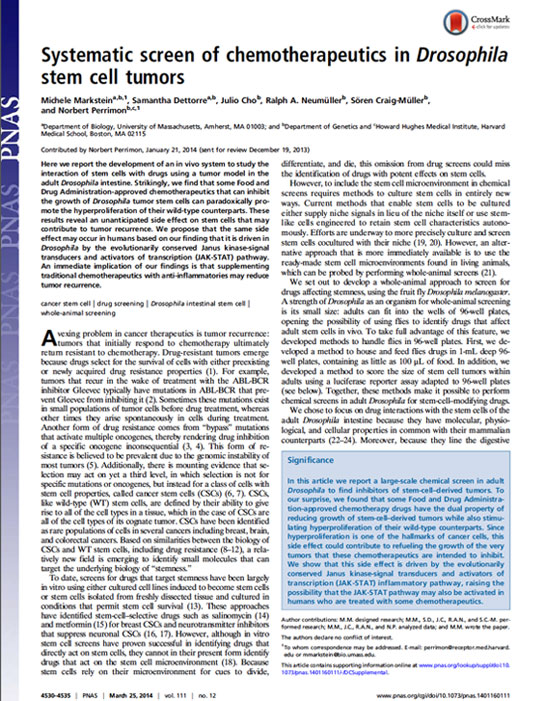 Modeling colorectal cancer as a 3-dimensional disease in a dish: the case for drug screening using organoids, zebrafish, and fruit flies 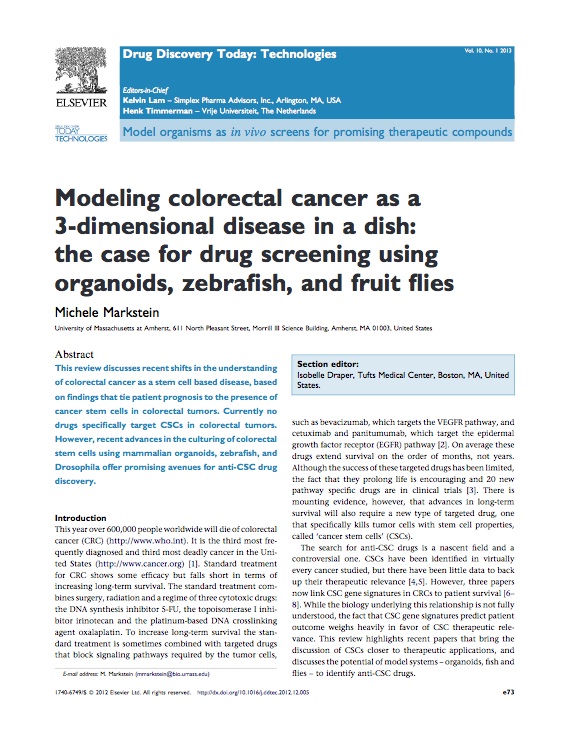 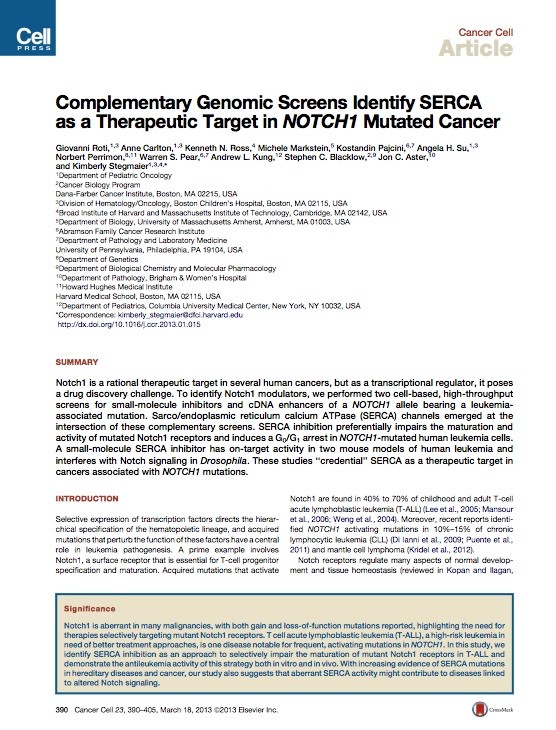 A Drosophila resource of transgenic RNAi lines for neurogenetics 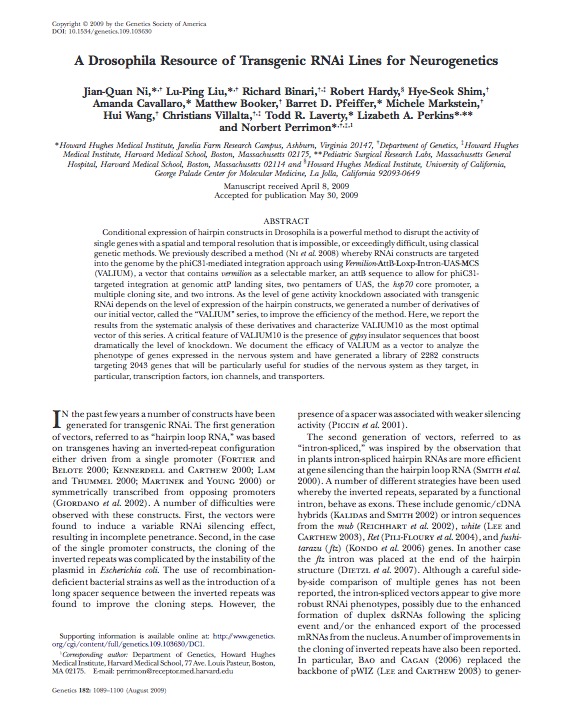 A major obstacle to creating precisely expressed transgenes lies in the epigenetic effects of the host chromatin that surrounds them. Here we present a strategy to overcome this problem, employing a Gal4-inducible luciferase assay to systematically quantify position effects of host chromatin and the ability of insulators to counteract these effects at phiC31 integration loci randomly distributed throughout the… Download Paper: PDF 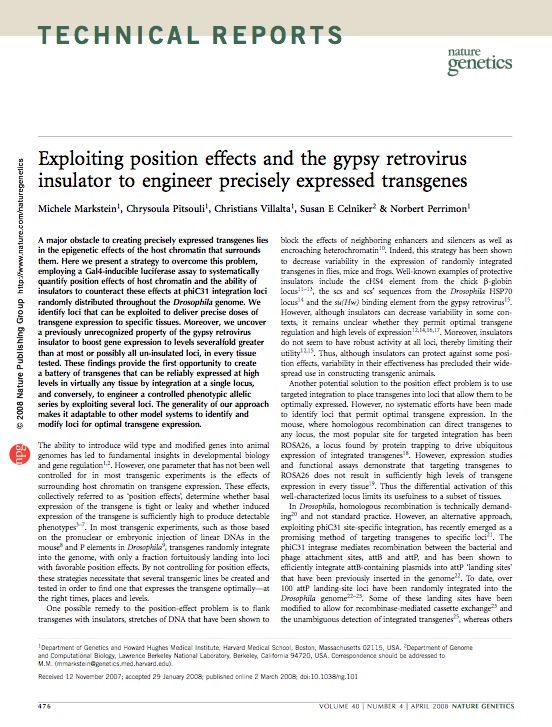 The conditional expression of hairpin constructs in Drosophila melanogaster has emerged in recent years as a method of choice in functional genomic studies. To date, upstream activating site-driven RNA interference constructs have been inserted into the genome randomly using P-element-mediated transformation, which can result in false negatives due to variable expression. To avoid this problem, we have developed a… Download Paper: PDF 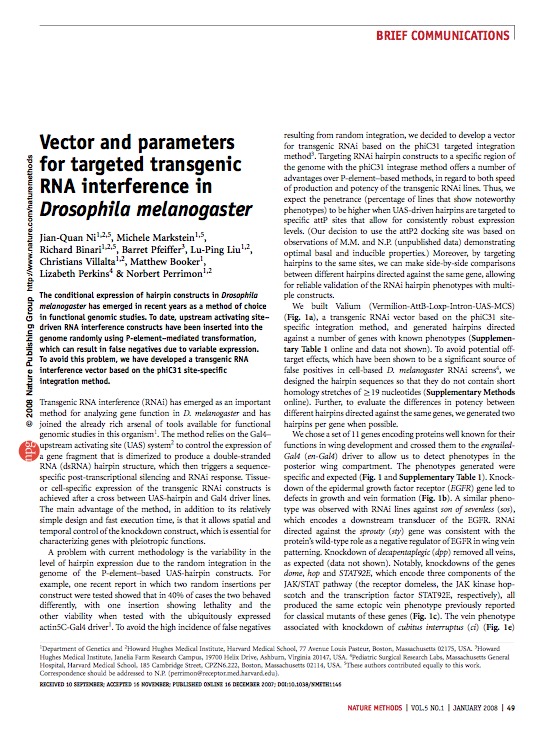 A regulatory code for neurogenic gene expression in the Drosophila embryo

Bioinformatics methods have identified enhancers that mediate restricted expression in the Drosophila embryo. However, only a small fraction of the predicted enhancers actually work when tested in vivo. In the present study, co-regulated neurogenic enhancers that are activated by intermediate levels of the Dorsal regulatory gradient are shown to contain several shared sequence motifs. These motifs permitted the… Download Paper: PDF 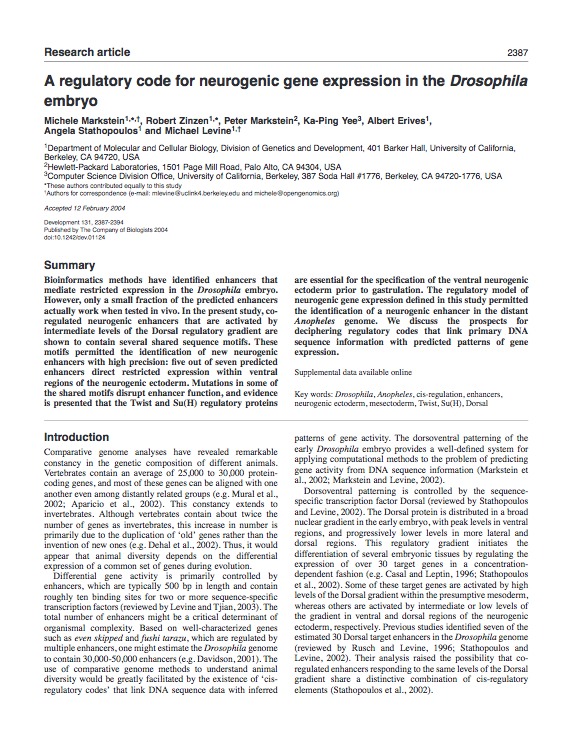 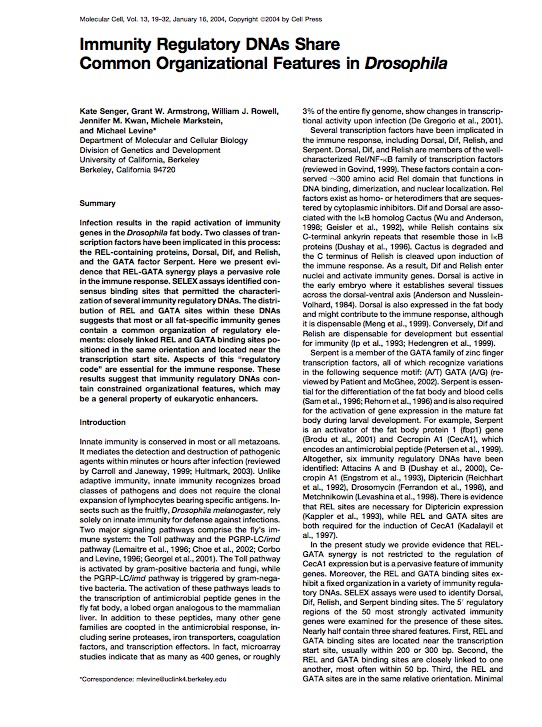 Whole-genome analysis of dorsal-ventral patterning in the Drosophila embryo

Stathopoulos A, Van Drenth M, Erives A, Markstein M, Levine M. The maternal Dorsal regulatory gradient initiates the differentiation of several tissues in the early Drosophila embryo. Whole-genome microarray assays identified as many as 40 new Dorsal target genes, which encode a broad spectrum of cell signaling proteins and transcription factors. Evidence is presented that a tissue-specific form of the NF-Y transcription complex is essential for the activation of gene expression in the… Download Paper: PDF 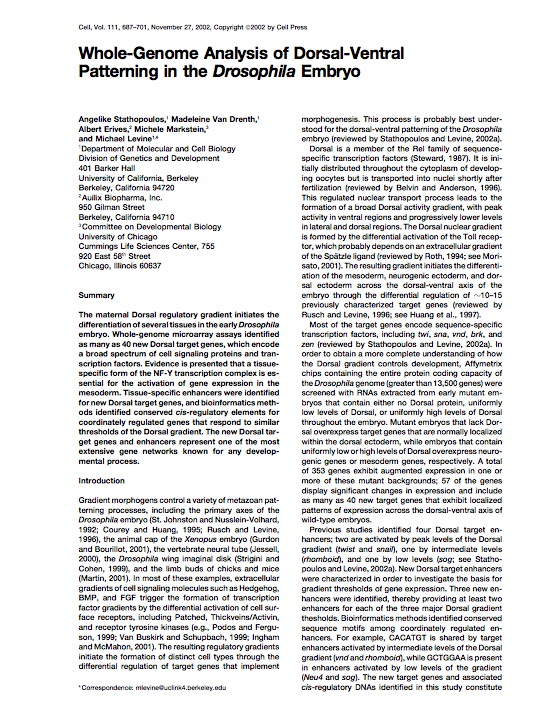 Current Opinion in Genes and Development

Markstein M, Levine M. Cis-regulatory DNAs control the timing and sites of gene expression during metazoan development. Changes in gene expression are responsible for the morphological diversification of metazoan body plans. However, traditional methods for the identification and characterization of cis-regulatory DNAs are tedious. During the past year, computational methods have been used to identify novel cis-DNAs within the entire Drosophila… Download Paper: PDF 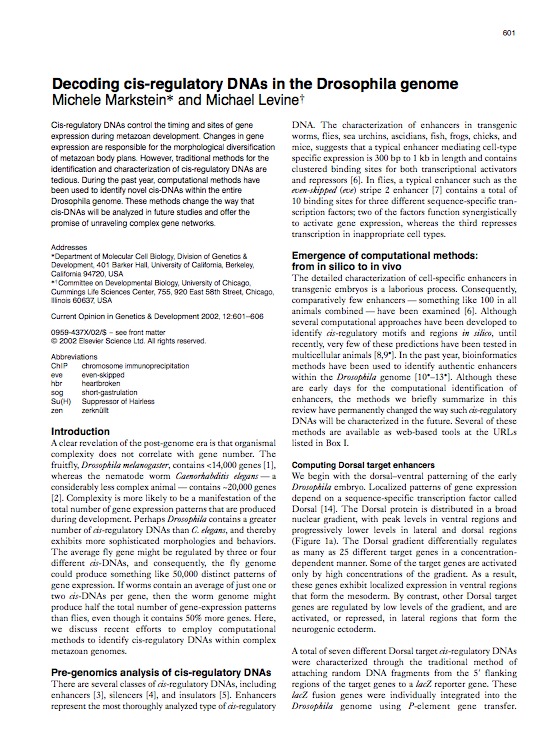 Markstein M, Markstein P, Markstein V, Levine MS. Metazoan genomes contain vast tracts of cis-regulatory DNA that have been identified typically through tedious functional assays. As a result, it has not been possible to uncover a cis-regulatory code that links primary DNA sequences to gene expression patterns. In an initial effort to determine whether coordinately regulated genes share a common “grammar,” we have examined the distribution of Dorsal recognition… Download Paper: PDF